Trailer for Sale or Rent 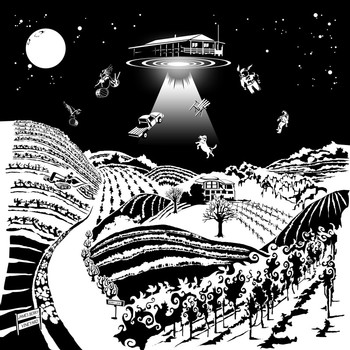 Wine Wednesday
Trailer life was pretty common for many Templeton families back in the 70s and 80s. My family lived in a trailer while the adobe was being built, Matt and Michael Dusi and I drove go-karts around their trailer at the Dante Dusi Ranch as kids, and Pebble, Terry and Justin Smith lived in a blue double-wide for many, many years as they developed the James Berry Vineyard. They were undoubtedly saving money for farm equipment, like the little Honda ATV that Pebble bought for vineyard work. Justin and my brother Rod were in Junior High at this point (I must have been in 4th or 5th grade), and Pebble allowed Justin to drive the quad over to our ranch to ride around our gravel pit which also contained a small pond. I remember asking for a turn, getting on the quad and managing, somehow, to crash it almost immediately into the pond. Justin swam in after it while I apologized profusely, and eventually Pebble drove over and rescued the flooded little scooter. I am pleased and relieved to mention the fact that this little Honda quad is still in use at JBV to this day. As for the pond, I got my revenge a few years ago, back filling the hole with sandy gravel and planting Grenache and Roussanne over it. We now call it the "Lake Block".

I can't seem to find any photos of our trailer on the Adams Ranch, but I remember it fondly. My Mom and Sister? Not so much. My brother and I seemed to revel in the fact that we could tape newspaper clippings of sports photos on the walls in our bunk, kick open a side door and relieve ourselves at any hour of the day and generally harrass my sister, who at this time was on the verge of becoming a young woman. Being a female pre-teen in a trailer with two little boys had to have been challenging, and if she didn't routinely kick the crap out of us, I would still feel bad about the juvenile shenanigans she had to endure at the hands of her burpin', tootin', lizard catchin', tree climbin' prankster little brothers.