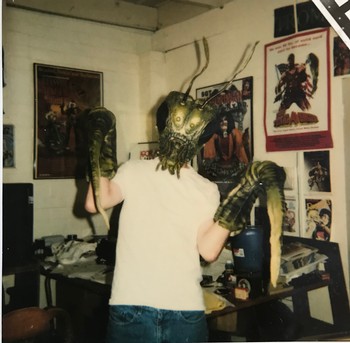 We made some pretty hilarious movies as kids at the ranch. Game shows, talk shows, phony phone calls, stop animation, crime dramas, fantasy, music videos, you name it. None of it was very good, but we were prolific and are still happiest in the creative realm.

I practiced music and filmmaking as a kid and on through college at Chico State, where I majored in Humanities, Cinema Studies, rock n roll and Sierra Nevada beer. Chico State was chosen after a statewide road trip with Justin Smith, who true to form, generously took me to visit a variety of college towns in order to help me decide.  My knowledge of wine was minimal, but during my time at Chico State, (usually around Thanksgiving) I was gifted killer bottles of red wine from James Berry Vineyard, unlabeled but remarkable Rhône blends called "Barn Red" and "Farm Red".  These early wines were very much like the JBV wines of today: balanced, inky, tannnic, ripe, floral and simply delicious. Those were good times up in Chico, but a move needed to be made and I chose Los Angeles to sniff out new creative opportunities.

After an embarrasing stint as a singing waiter at an Italian restaurant, I landed a job as an usher at the Regent movie theater which was was also a film production company.  I was hoping to go from sweeping popcorn and tearing tickets to writing and scoring movies. I arrived to work early and stayed late and eventually was rewarded with jobs on several low-budget films in varying capacities, learning that a lack of money should never prevent one from executing their visions, especially at studios like Troma where their B-Movie battle cry is "Let's Make Some Art!" That mantra stuck with me even when I landed a solid  job as a sound effects editor at Sony Pictures. I got myself a studio apartment near Pacific Coast Highway and Sunset Boulevard where I would eventually meet my wife. Everything had fallen into place, except for the fact that I was creatively stifled.  To top it off, my plan to buy a ranch was about 30 years away were I to retire with earnings from the Editor's Guild.

My family was proud of my work at Sony, but I think they sensed that I wasn't content, and they welcomed my coming back to help develop the ranch the family already owned. Justin and I remained close and I sought his advice. Not wanting to be a copy-cat, I asked him about planting an orchard or some other non-grape crop on the property. He cautiously suggested that a small vineyard may be better and that he could show me the ropes in exchange for labor and some fruit when the time came. Delighted, driven and inspired, I prepared to move, but it was essential that I keep my Sony job in order to maintain a living wage. Over the course of many months I traveled from Los Angeles to Paso Robles on weekends, assisting at Saxum and learning the ways of a vigneron. It was around this time that I met my future wife, Ciera Lamborn, a Soprano at the Los Angeles Opera. She and I had what we affectionately called a "summer fling" that never fizzled. She was familiar with Paso Robles, but hadn't explored the countryside where the Adams Ranch is located. I think she fell in love with the Adams Ranch and the Willow Creek District almost as much as with me. My parents gave me their blessing to plant some grapes, I eventually became Saxum's first employee and I married Ciera, the love of my life and Ledge Vineyards visionary in her own right.

"What the hell." we figured, "Lets Make Some Art!"